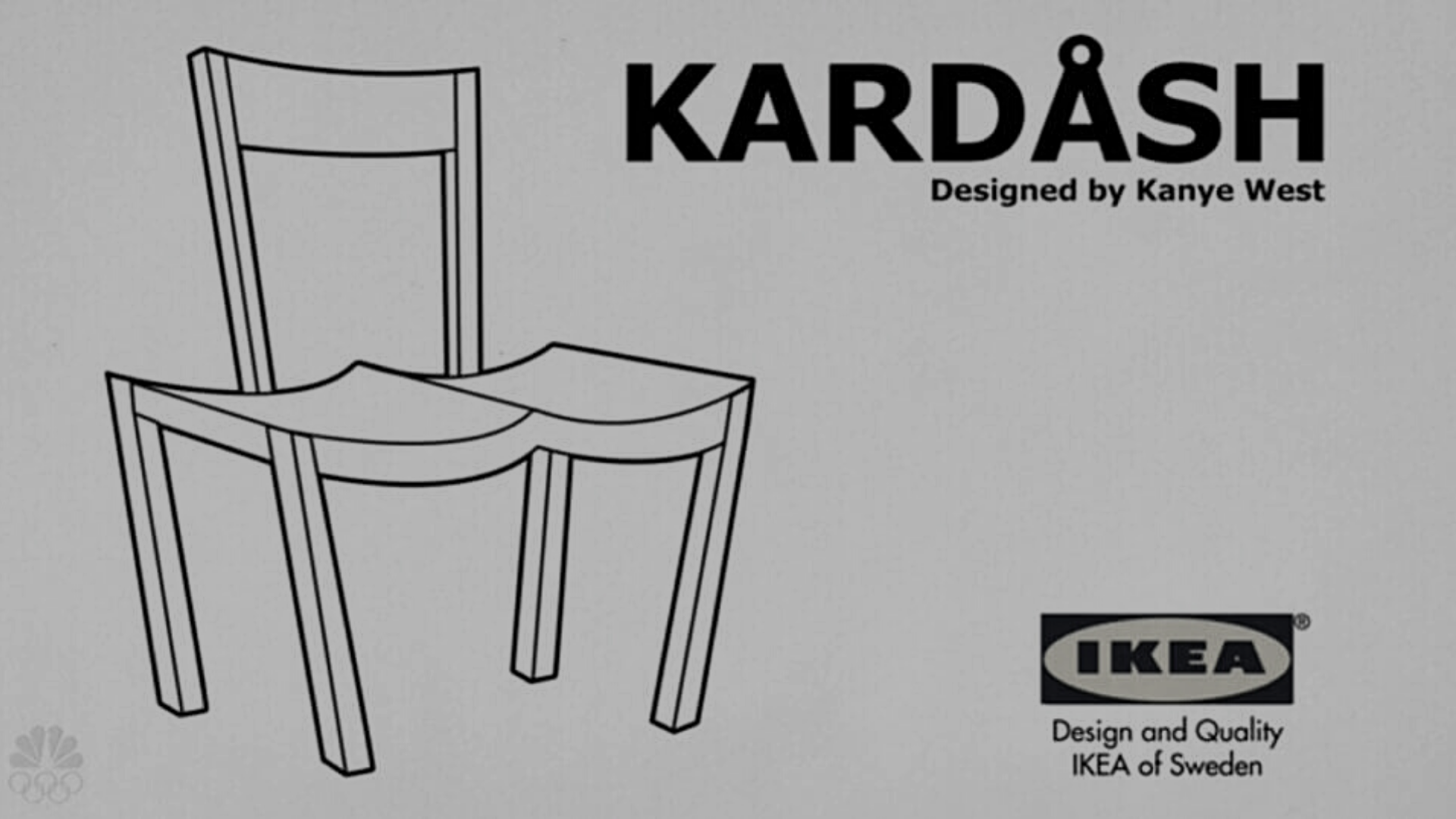 What can be done in a minute?

I have heard of people who in 60 seconds can solve a Rubik’s cube or recite the value of the Archimedes constant with an accuracy of several dozen decimal places. Byt we – ordinary people – during this time, we can at most pour boiling water over a tea bag or check the time on the phone.

Because according to the Data Never Sleeps 8.0 survey, there’s a hell of a lot going on every minute on the Internet every day. For example, 147,000 photos appear on Facebook. 69,444 LinkedIn users report their willingness to work. YouTube expands by another 500 hours of video content… PURE MADNESS.

Trying to hit your customers in this chaos can be just as crazy. But I’m here today with something that can help.

What is Real Time Marketing?

The definition is very simple.

Real Time Marketing is basically a form of marketing that happens in real time.

It is an IMMEDIATE REACTION (Caps Lock is purposeful here because the lifetime of RTMs is usually a few days) of the brand to what is happening around – it can be, for example, a reaction to a tweet of a competition, a funny commentary on a current event or an original interpretation of a loudly commented scene in the premiere episode of the series.

RTM is about getting closer to your audience by carefully following current events and using them appropriately in brand communication.

How is Real Time Marketing different from Contextual Marketing?

It happens that – for example, when planning the schedule of posts in social media – we take into account the upcoming holidays or events, ex. the football world championship, the Paris Fashion Week or the premiere of the next TV series on Netflix. And I want to emphasize at this point that this is NOT Real Time Marketing. It is contextual marketing. 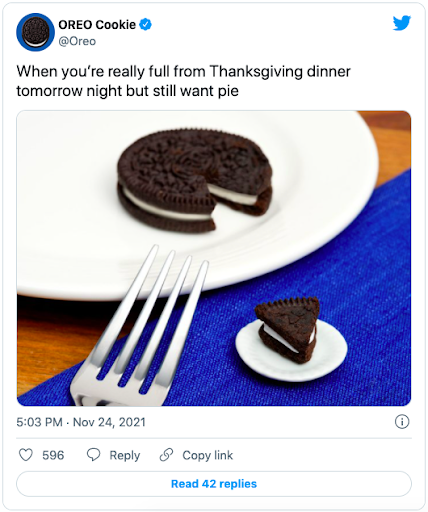 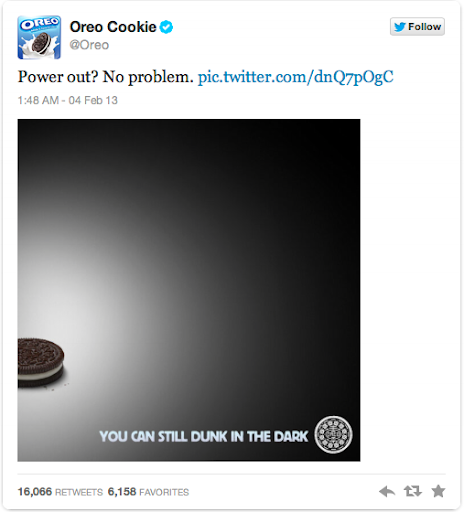 The one on the left is an example of Thanksgiving contextual marketing. This entry could be planned in advance, because it refers to a cyclical event, and the content presented will always be up-to-date – after all, we can assume that in the coming years the Americans will also struggle with overeating around the fourth Thursday of November.

The graphics on the right are an example of Real Time Marketing. The post suggesting that Oreo cookies can be dipped in milk even in the dark (the word “dunk” means both “dipping” and “hitting the basket”) was the brand’s spontaneous response to a lighting failure during the Mercedes-Benz Superdome basketball competition.

This post could not be planned, and its content ceased to be relevant the moment after the match ended – and this is the difference between RTM and contextual marketing…

So let’s look at some more RTM examples.

Apart from Oreo cookies, Ikea is the absolute master of Real Time Marketing.

For many years, the brand has reacted rapidly to the surrounding reality and comments on it in a funny way.

Thanks to the wide range of products, they managed to match the products to the events that the internet – for example, a scene from the series “Game of Thrones”, in which one of the characters tried to close the door, constantly shouting “Hold the door!” – which ultimately drove him mad, which made him repeat the word “Hodor” for the rest of his life. This inspired the brand to expand its range with … a door stop called HODOR.

Ikea’s Real Time Marketing is not afraid of difficult, political examples or connections with other brands like Apple. 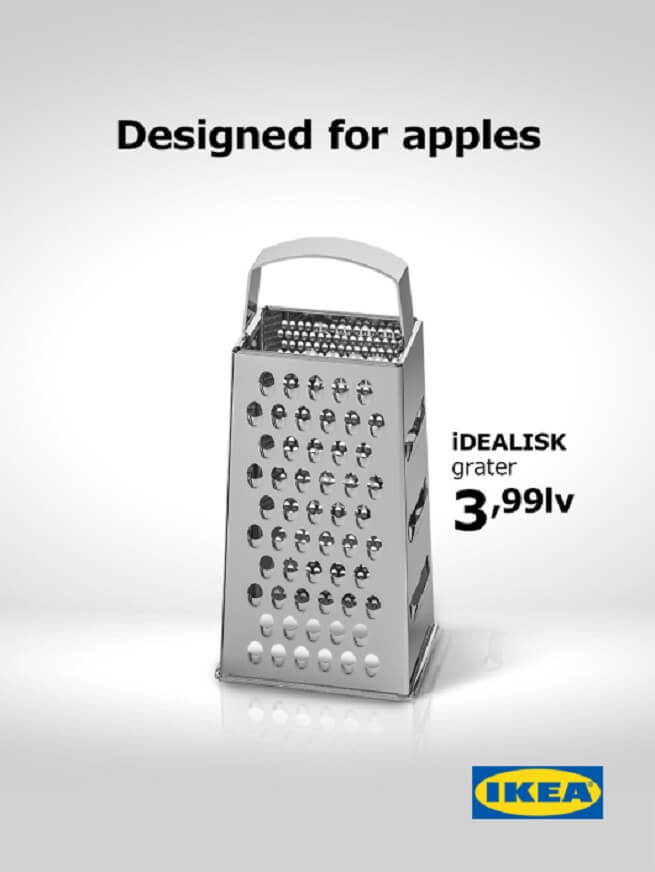 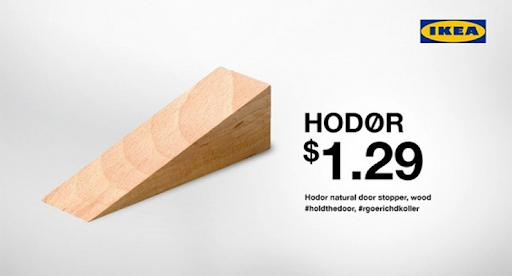 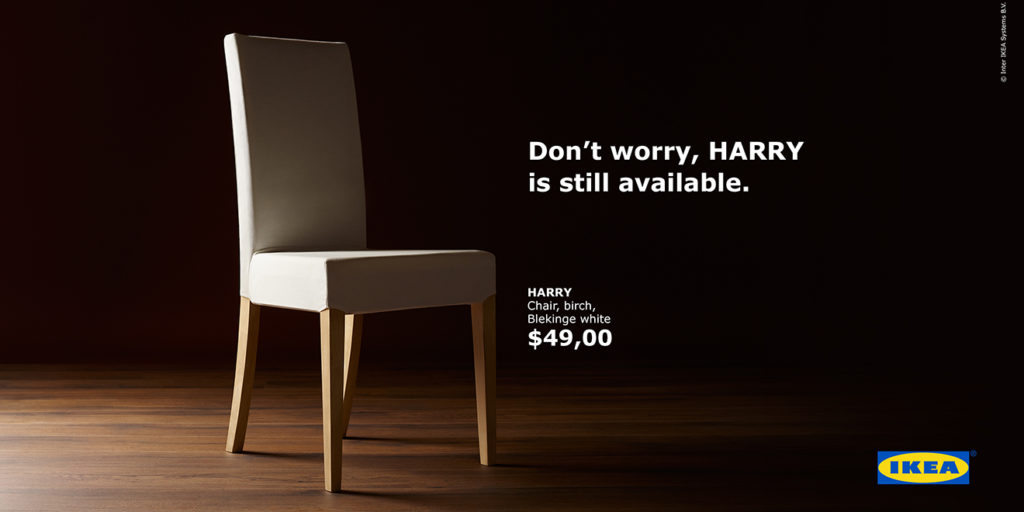 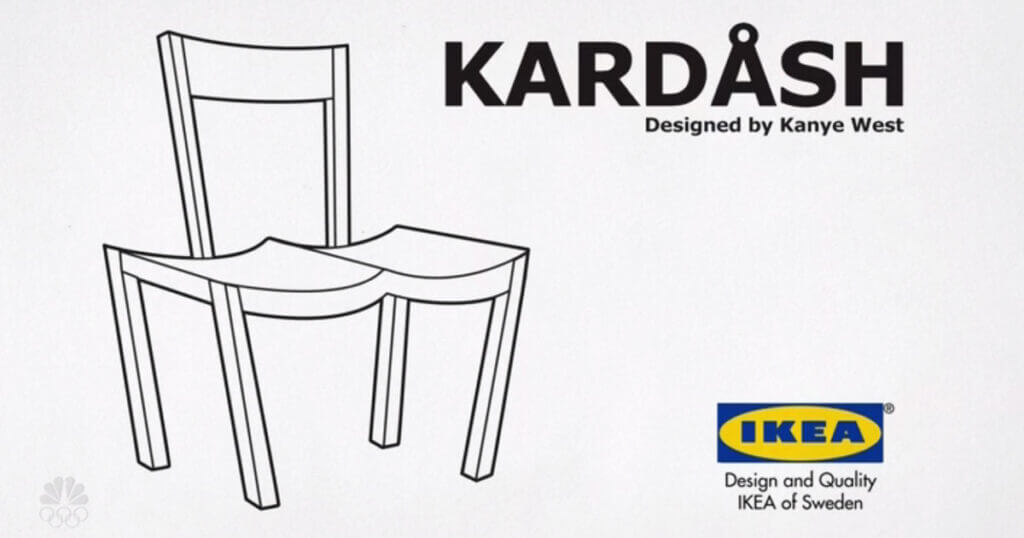 KitKat reacted on new bending iPhone and Lego acted on Oscar for DiCaprio. 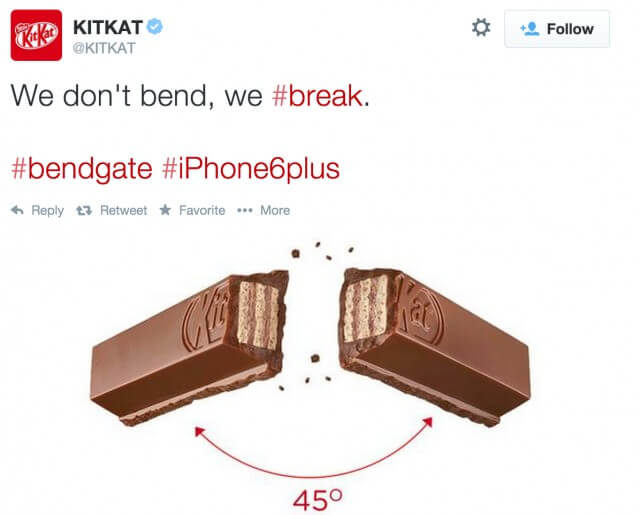 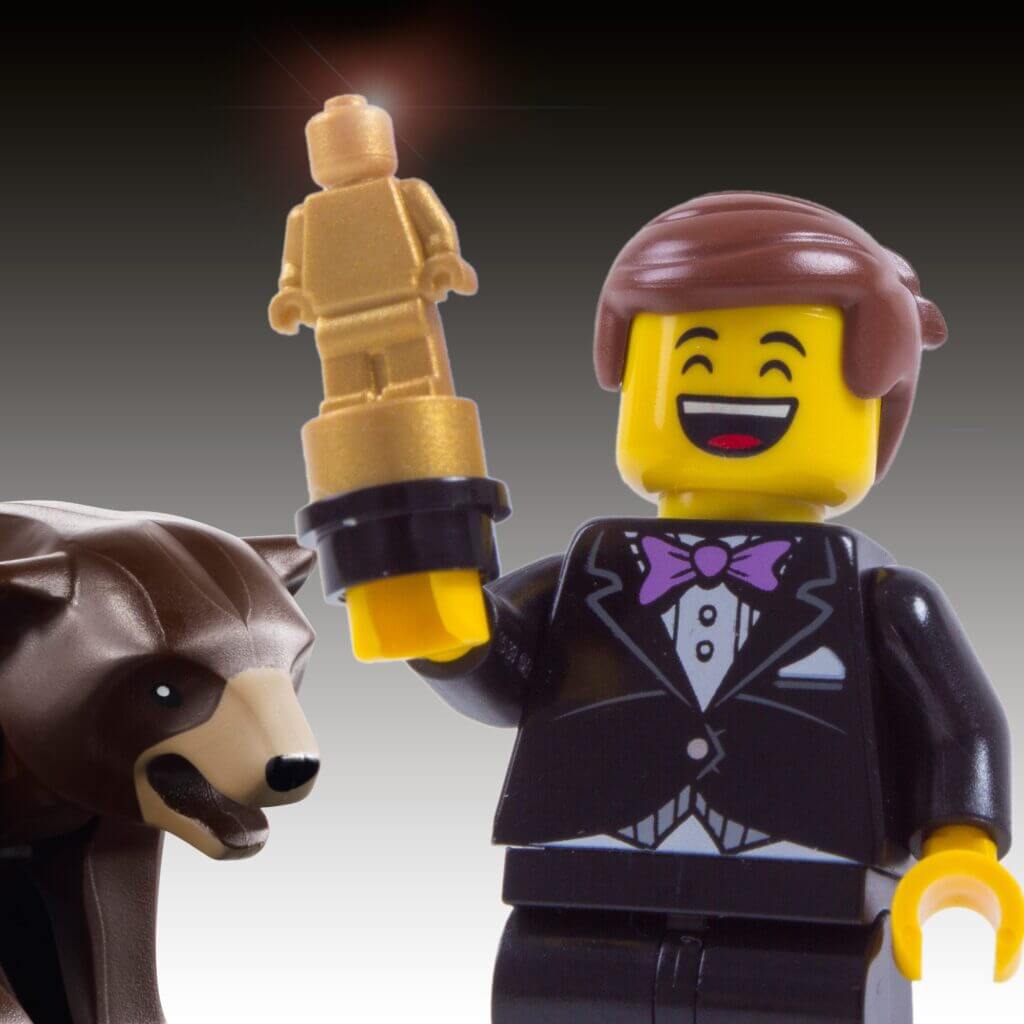 1. Take a calendar. RTM can be planned in advance, just check the calendar and choose cool upcoming events.
2. Explore the area. Analyze all possible variants of the event ending. After all, the final will either win or lose, and in the presidential election always half will be dissatisfied.
3. Simple and easy. This is a very important point, because the recipient should immediately know what it is about. The graphics must be as simple as possible, and in creating the content, it is best to follow the principle of removing unnecessary words.
4. Relate to the activity. Try to choose events that have anything to do with your offer. Nothing by force.
5. Tag. Tagging helps to increase your reach and explains what our message is all about. 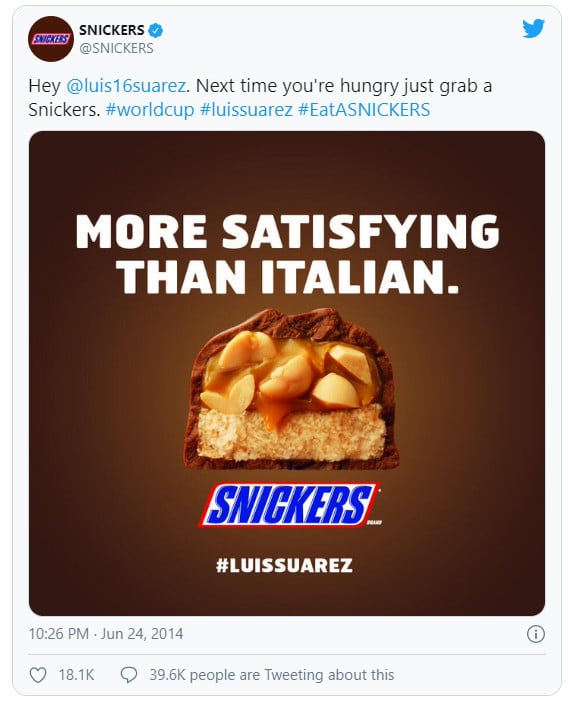 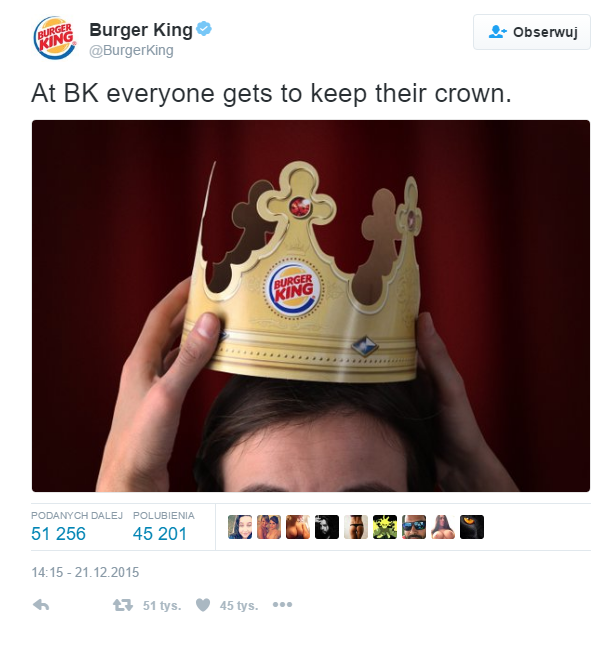 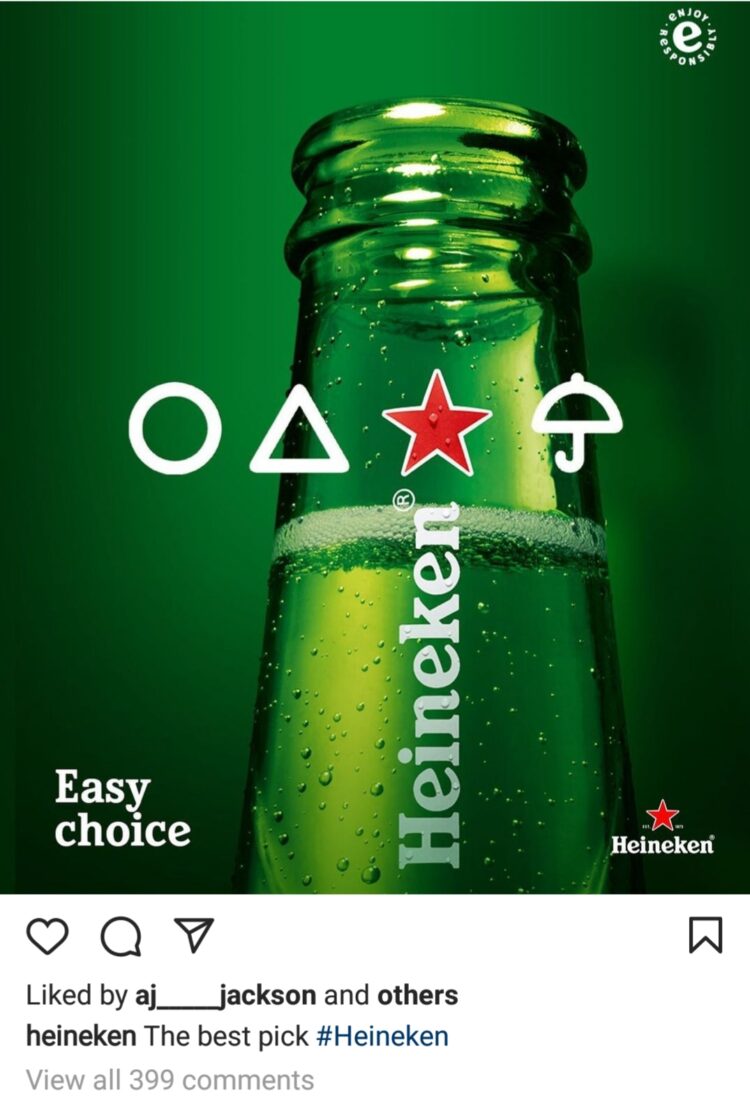 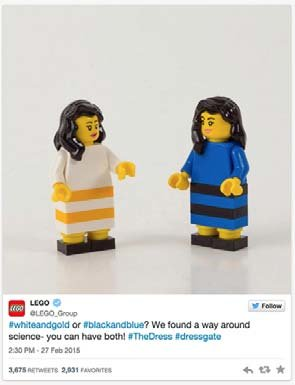 Do you want to check how your company can use real-time marketing? Leave your email. Our consultant will reach out to you to schedule a call.